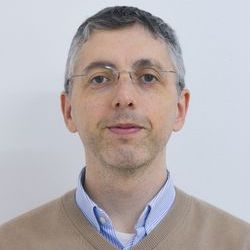 Over the last six years, FLAME has been lucky to collaborate with talented scholars on at least four continents. As part of a new series of blog updates—Fireside Chats—FLAME is talking to some of its long-standing contributors to ask for their perspective on the project. We wish to honour their efforts, but we also want to showcase diverse and sophisticated research that should be of interest to all scholars of the Late Antique and Medieval economy. We hope that these interviews help the public to understand the kind of work that FLAME is doing and the benefits of this project, both for specialists in the field and for the general public.

Our first interviewee is Asst. Prof. Luca Zavagno of Bilkent University. He is the current team coordinator of our Turkish FLAME contributors (the team also includes Fermude Gülsevinç, Ayşenur Mulla, and Yunus Doğan of Bilkent University). We thank him for taking the time to talk to us (on a weekend, no less) and hope that others enjoy this discussion.

Mark Pyzyk: Can you tell us a bit about your current position and research outside of FLAME?

LZ: I am working as an Assistant Professor at Bilkent University in Ankara, in the Department of History. I was hired in 2016 to take care of the Byzantine component of their graduate program. I teach courses like “Venice between Byzantium and the Ottomans”. In terms of my research interests, there are two main projects I am currently working on. The first is on Byzantine islands in the so-called Dark Ages—that is, big Byzantine islands that remain under their sway, from the Balearics via Sicily and Crete down to Cyprus. These islands show a degree of economic resilience that other parts of the empire do not. The second project has to do with Byzantine cities, which was the topic of my PhD thesis and my first monograph. I am currently working on the Routledge Handbook of Byzantine City, together with a colleague with whom I am co-editing.

MP: In terms of FLAME and your work there, could you tell us about the context in which you came to work with them?

LZ: I was very lucky to meet Alan Stahl, the curator of Princeton’s numismatic collection—the keeper of coins—in 2012 when I was teaching in Northern Cyprus. In that year, I was a fellow at the Center for Hellenic Studies, writing my second monograph on Byzantine Cyprus (which was published in 2017) and I wanted access to coins from the Antioch excavation, which Alan was working on. He liked my work and started talking about this FLAME project. Since I was in Cyprus, he told me that it would make sense for me to help them with coins found in Cyprus—which I did. It was a very nice experience. We met again when Alan organized the first [FLAME] conference in 2016. In essence, I was in the right place at the right time, when the project was still in its infancy, when it was effectively still in Alan’s imagination.

MP: Could you explain in your own words what you think are the goals and merits of the FLAME project?

LZ: From the start, one of the things that I found appealing is that the project is sort of unprecedented, at least for the period we are talking about. It was exciting to be at the forefront of something new. For me, personally speaking, for my book on Cyprus—the way you can trace the mint, the way you can trace the provenance of the coins, the way that you can bring into the picture aspects you did not even suspect were there—the merits become obvious. Now that we are moving from Minting to Circulation [ed: two successive stages in the completion of the FLAME database], the tool should become even more invaluable for anyone working on the “Dark Ages” in the Mediterranean. Moreover, it brings together scholars from different walks of life. For example, I am not an archaeologist—but the project has archaeologists onboard, it has art historians, from all around the world. This broadens the perspective of Byzantinists, who tend to work on the Aegean and Anatolia, in ways that are invaluable.

MP: You mentioned the “Dark Ages” in quotation marks (something that doesn’t come through in an audio interview!). Could you expand on that? How does a project like this help to get some purchase on this question, informing discussions on the transition from the Late Antique to the Medieval economy?

LZ: You can answer this question with a word, which is connectivity. I think the period between the 6th and 10th century, which is labeled “the Dark Ages” has always been looked down upon by historians and archaeologists. They believe that cities tend to collapse, that there is an end to urban life, a retrenchment of the economy, that there is no unified Mediterranean—as had existed under the Pax Romana. Recently, scholars working on this period—Lee Mordechai, for instance, who is challenging the idea of the Justinianic Plague being catastrophic for the Mediterranean, or Alan, who has been working on the topography of Antioch as related to coins, yielded by excavations, and which shows how much activity there continues to be, which is true of other cities like Ephesus, or the countryside of Aegean islands—these are places where FLAME’s data can be woven into reassessments of the Dark Ages. FLAME has been spearheading this effort, trying to make it visible—and with the web tool, you can click and you can see. With ceramics and with seals, it’s a little bit harder to do. Indeed, it seems to me that FLAME sheds a new light on the Dark Ages of Byzantium and beyond.