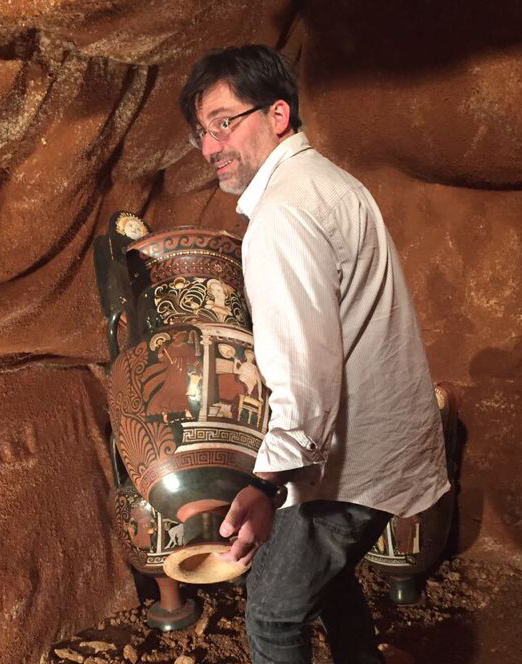 Mark Pyzyk (MP): Can you tell us about your current position and affiliation?

Giuseppe Sarcinelli (GS): I work at the University of Salento (Lecce-Italy), where I run the Laboratory for the Study and Documentation of Numismatic Evidence, and I give lectures and organise workshops in Medieval and Modern Numismatics at the School of Specialization in Archaeology. I am responsible for the analysis of the monetary material recovered from the numerous excavations carried out by my university throughout Italy. I also collaborate with other Italian and foreign universities, and with several Soprintendenze Archeologiche, namely government bodies for the preservation and enhancement of the Italian archaeological and cultural heritage, to study monetary findings or coin collections kept in Italian and foreign museums.

MP: Can you tell us about your recent research?

GS: I am working on a project of DNA recognition of traces of plague or Yersinia pestis in fourteenth-century burials from Apulia, which has led to interesting results that are currently being published. I am also studying five hitherto unpublished small treasures (three ancient Greek and two medieval) forming part of the collection of the National Archaeological Museum of Taranto.

MP: How did you come to work with FLAME, initially?

GS: The first person who told me about FLAME was Lucia Travaini, Professor of Medieval Numismatics at the University of Milan, who suggested I collaborate on the project. I therefore contacted Alan Stahl, who immediately welcomed me, and introduced me to Lee Mordechai and Mark Pyzyk. It was my idea to create a working group made of colleagues and researchers that, under my supervision, would have collected data for Southern Italy, Sicily and Sardinia.

MP: What would you say the merits of the FLAME project are? How would you describe its goals?

GS: The chronological framework is the first merit of the FLAME project. The collection of monetary data dating between CE 325 and 725 allows us to fill a gap that has always characterized numismatic studies in Italy, which have traditionally focused on other chronological periods, thus neglecting the late antique and early medieval ones. The geographical scope of FLAME is the second merit of this project: such an extensive collection of data on coin finds in Europe, Africa, and Asia is unique and unprecedented. Last but not least, a third merit of FLAME is the promotion of an intensive information exchange and collaborative networks between scholars from all over the world and at different stages of their careers.

MP: As the coordinator of a South Italian team, could you tell us a bit about the goals of the group, and some of its results up to this point?

GS: Obviously, the subdivision into regions is only a practical measure that provides each collaborator with a well-defined geographic area on which to concentrate their efforts; we are well aware that these subdivisions relate to the modern administrative borders of Italy. The next step will be to compare Southern Italian data with those collected by colleagues responsible for Northern and Central Italy. When available, special attention should be given to the archaeological context in which monetary findings occurred, whether this was an urban, rural, sacred, sepulchral, or a commercial area, for example. A first result that I think I can gather from the work done so far is that these centuries are proving to be very rich in evidence of monetary exchanges, allowing us to draw a picture of a world of particular economic vibrancy.

The South Italy group, of which Professor Sarcinelli is the coordinator, works cooperatively to cover as much of the bibliographical material as possible for this region. Unfortunately, there is no reliable, unified corpus of coin finds for the whole of South Italy (singular exceptions prove the rule, such as the “Chora” project relating to Basilicata—a project that at one time included FLAME contributor Bruna Gargiulo among its staff). There is an Italy-wide project, undertaken by Ermanno Arslan (Repertorio dei ritrovamenti di moneta altomedievale in Italia, 489-1002), which is wide-ranging. Nevertheless, it does not facilitate comprehensive coverage of individual regions, and it therefore falls to more specialized projects to undertake such work. Consequently, FLAME’s South Italy group has collaborated to produce a repository of sources, which includes published and unpublished evidence, which they then divide among members for digitization using FLAME’s online data entry system.