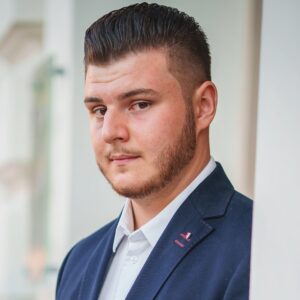 MP (Mark Pyzyk): Can you tell us your current affiliation and status?

MP: Tell us a bit about your current research.

ICP: Currently my research focuses on the study of the transformation of Balkan society in the 7th century CE. But I have other interests, on other topics, which I have been involved with. For instance, I have been studying Seleucid serrated bronze coins, have been working on intersections between international relations and history, and have a particular interest in Persian coinage, which I’ve combined with my work for the FLAME project.

MP: That is a wide-ranging set of interests! How did you come to work with FLAME?

ICP: Well, coming to work with FLAME was interesting. I was aware of the project and its methodology and goals from the time I came to this university and attended some conferences where FLAME’s name was mentioned. I had been working in the numismatic collection of Firestone Library at Princeton from my first year at the university, and when COVID shut the university down, or some time before that, I was approached by the chief curator of the collection, Alan Stahl, with a proposal to work on the FLAME Project as an assistant to the soon-to-be Coordinator, Mark Pyzyk. I agreed and Dr. Stahl brought me onto the project.

MP: You mentioned the goals of FLAME, and this has been a standing question we have put to interviewees in this series: How would you describe the goals of FLAME? What do you think the merits of the project are, in a larger sense?

ICP: Oh, I think that the website does a pretty good job of outlining what the goals are: Studying minting and circulation in western Afro-Eurasia between the start of the fourth and the mid-eighth century. Now, what I find unique about this project is the fact it investigates data that has been traditionally very well studied in a different manner. Numismatics is at least a century and a half old, but this is the first actual attempt to do a large-scale mapping of coin finds and the first large-scale, statistically significant investigation of coinage in circulation in this period, and I think that its methodology of differentiating between coin groups as opposed to differentiating between individual coins is a wonderful approach that could be emulated by scholars of other time periods in numismatics. I think that, ultimately what helps FLAME is that it is digital and free to access—that scholars are free to use it and to contribute to it.

MP: So, having discussed FLAME’s strengths, what would you say some of the pressing issues are, and indeed, the challenges?

ICP: Right, even with all of its strengths, FLAME is not perfect. Our data is biased, in particular matters, and some of that bias is un-addressable. As we’ve spoken about in a variety of presentations, we can’t have an accurate idea of how much was lost, how many coins were minted. We can’t do much about legislation, the study of numismatics [in different countries], and the way it defines our catalogue. We can’t do anything about that.

If I thought we could do something better, it might be to make our regional coverage, A.) have greater variety, in the sense that we should be including finds, for example, from Sasanian Iran and North Africa, but also Russia, Poland, and so on—and that, I think, is in the works right now. B.) to try to make sure that our data and our coverage of the different regions, which we already have a hefty amount of work done on—for example France, Spain, Italy, the Balkans—that that data be fairly consistent and equally representative of both the situation on the ground and of the scholarship in the region.

MP: I think that answer highlights the fact that you’re in a unique position among the people we’ve interviewed in this series, so far, because you’re on the inside. That means, partly, having access to behind-the-scenes data frameworks, working directly on some of the metadata categories, but it also means that you’ve worked across regions [in a way that other FLAME contributors tend not to]. It means that you have exposure to sources, for instance, for Merovingian France (since you digitized Lafaurie and Pilet-Lemière’s catalogue on that region), you’ve worked on sources from Trans-Carpathia, etc. So you’re in a position to say a bit more than other contributors have about how such trans-regional scope has affected your scholarship. I am wondering how this broad, general exposure has influenced the work you do on particular regions?

ICP: In my case, what I think I’ve gotten from the project, is the idea that you have to think broadly. As easy as it is to be drawn into the specifics of the archaeology, for example, of the single site, single region, or whatever, that kind of focus can sometimes be misleading. Let’s take, for example, a particular [hypothetical] Balkan fortress. Let’s imagine, that fortress has a find of coins minted in the year, say, 562. Well, that’s during the reign of Justinian, so what has historically been the argument is that, for example, this coin marks the final habitation phase of that settlement. Because there are no more coins found there, the site was abandoned after. For example, if you have hoards that are concentrated, even in a broad region, such as a river valley, often an argument has been made that they are cotemporaneous, which means that they might be markers of an invasion, sort of a pathway of invasion.

Such methodologies are shown to be questionable if you go to a larger level, as FLAME tends to, because FLAME uniquely allows you to be comparative and broad, to see a bigger picture, and seeing the bigger picture may change your perception of an individual settlement, or may help you to contextualize it. Let’s say that, OK, this site has a coin from 562, but there is a neighboring town 5 miles away that has a final coin from 610: Does that matter? How do we explain the difference? How does that compare to the situation in other parts of the world? That is how it’s affected my research. It’s also made me more conscious of how coinage types actually work—in the sense that, one always gets caught up on the individual coin, you always emphasize the individual coin, its value, weight, die-axis. But if you set this aside, it may actually help you understand coin production better than studying coins from a collection or even a single mint.

MP: You’re an early career scholar. What are your future plans?

ICP: My long-term goal is, rather than an early career scholar, to become simply a career scholar. I want to become a researcher and professor at an elite institution of education, either in the United States or Europe, and would be very interested in pursuing research through a chronologically broad and geographically diverse subject. For example, my interests span the entire first millennium in the eastern Mediterranean, from Ethiopia to the Balkans, from Sasanian Persia to North Africa. That would be my goal, to be a scholar of this time period and to craft a scholarly methodology that is interdisciplinary and based in broad perspectives, as well as in perspectives that decentralize imperial and national narratives that have been dominant in scholarship.

In order to pursue that goal, my first step is to undertake a Masters Degree in Late Antique and Byzantine Studies in Oxford University, which I will start in October of 2022. At Oxford, I will have the privilege of working under Dr. Julian Baker on 12th– and 13th-century Byzantine coin imitations. After the completion of the degree, I will then apply to several PhD programs in England, Germany, and the United States. I hope to gain admission to a program where I will have the supervision and opportunities necessary to develop into a mature scholar and to hopefully prepare interesting pieces of research in several fields including numismatics, history, and archeology.

ICP: If you read this and you are not a contributor to the FLAME project, but think you might like to be, please reach out. We are very interested in hearing your perspective, your experience, and would like you to add your research to the FLAME database. Also follow us on our social media platforms.